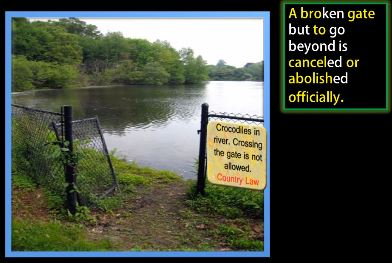 Enter a broken gate to learn this one

Mnemonic – A broken gate but to go beyond is cancelled or abolished officially.

a) to cancel or abolish officially

b) to do away with or abolish especially by law or authority.

1   There have often been debates of whether the government should abrogate the death penalty.

2   On being proved guilty of foul play, the state decided to abrogate the prestigious title given to him.

2   It seems God has abrogated my right to earn some good money.

3   As the society develops, certain laws lose their relevance and are bound to be abrogated.

1   The government cannot use war as a lame excuse for abrogating my fundamental right to speech.

Under the Lens: Abrogate and Abdicate

Abrogate is often confused with abdicate although the meaning of these words is not similar. Abrogate means to abolish by formal or official means while abdicate means to give up or renounce a throne, high office, right, power or the like, especially in a formal manner. To not get confused remember that abrogate and abolish both have an ‘o’ while abdicate and ‘give up’ both have an ‘i’.