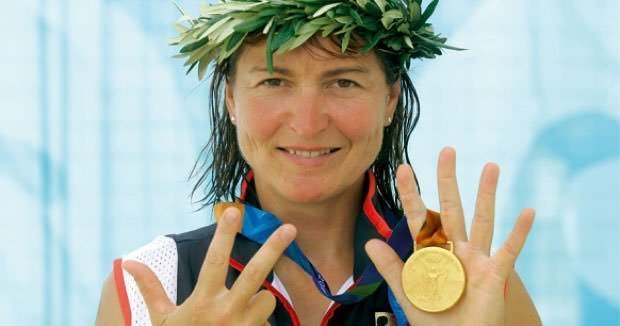 When you talk about canoeing, the first name that comes to your mind is Birgit Fischer. As an 18 year old representing East Germany, Birgit won her first Olympic gold medal in K1 500 at Moscow in 1980. She remains the youngest Olympic canoeing champion.

East Germany boycotted the Los Angeles Games four year later, preventing her from defending her title. Fischer came back in 1988 and won a silver medal in singles and took the gold in K2 and K4.

She won another gold and silver in Barcelona and repeated the performance in the 1996 Atlanta games after giving birth to two children. 38 years of age and nicknamed ‘Supermum‘ by the German press, Fisher again competed in the Sydney games and struck gold twice in K4 and K2. Having amassed 7 gold medals and three silvers, she decided to retire.

Till the autumn of 2003 she stuck to her decision. Her urge to compete rose again when a documentary team asked her to sit in a kayak to take a picture. While sitting in that old Kayak, she wondered – “What can I still achieve? How fast can I get fit again?” She decided to train again. In a few months she lost 7 kilos and regained her sharpness.

On 27 August, 2004 at the Athens Olympics, Birgit Fischer was canoeing along with her 3 teammates in the finals of the K4. But the Hungarians were the favourites having won the previous three world championships. In an epic finale Fisher used all her strength and experience to help Germany win the event by just 0.2 seconds. It was her eighth gold and twelfth Olympic medal. She became the first woman to win gold medals in six different Olympics. She was 42 years old and remains the oldest Olympic canoeing champion.