Black widow spiders are known around the world for eating their males after mating. They are also feared as they are the most venomous spiders in North America. Know more about this amazing animal through these 10 interesting facts. 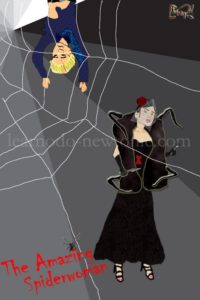 #2 Their venom causes a condition known as Latrodectism

The black widow spiders belong to the genus Latrodectus. The genus contains 32 recognized species. They are present in every continent except Antarctica. The venom injected by the bite of these spiders contains the neurotoxin latrotoxin which causes the condition latrodectism, both named after the genus.

#5 The females are three times more venomous than the males

A bite of Latrodectus may not inject any venom (dry bite) and hence cause no illness. About 75 percent of bites which are venomous (wet bite) will only cause localized pain and nothing more. If, however, a substantial amount of venom is injected by the bite it leads to latrodectism, which is marked by pain, muscle rigidity, vomiting, and sweating. It usually lasts for 3 to 5 days.

The venom of the black widow spider is reported to be 15 times stronger than a rattlesnake’s. Due to this it is much feared but contrary to popular belief, most people who are bitten by the black widow spider suffer no serious damage. However the bite can be fatal to small children, the elderly or the infirm.

#8 Black widows attack only in self-defense

Black widow spiders are not known to be aggressive and attack only in self-defense, such as when they are squeezed or pinched. While some species might be more aggressive than others, most injuries to humans are due to defensive bites.

Black widow spiders belong to the family Theridiidae, also known as comb-footed spiders, so called “because they have a series of stiff short hairs on the last segment of their fourth pair of legs that resemble the teeth of a comb.” They use them to cover their prey with silk once it is trapped. Their prey includes flies, mosquitoes, grasshoppers, beetles, and caterpillars.

#10 They liquefy their prey before consuming it

Black widow spiders construct a web of irregular, tangled, sticky silken fibers. They usually hang upside down near the center of their web. If an insect gets stuck, black widows rush to bite it and wrap it in silk. They then puncture their prey with fangs, inject enzymes to liquefy the corpse and suck up the resulting fluid to appease their hunger.