Jefferson Davis had an eventful life in which he served as a soldier, became a senator of Congress, led the Confederate States of America during the American Civil War and was caught and imprisoned after the war. Know more about the life and accomplishments of Jefferson Davis through these 10 interesting facts.

#1 Davis was named after US President Thomas Jefferson

Jefferson Davis was the last of ten children born to Samuel Emory Davis and Jane Cook. Samuel was an ardent admirer of Thomas Jefferson and hence he named his last child after the third President of the United States. Jefferson Davis was born on June 3, 1807 or 1808, on the Davis homestead in Fairview. There is confusion regarding the year of his birth because Davis gave it as 1807 in the early part of his life, then later on he gave it as 1808 and finally in his last years he settled on 1807 again. It is interesting to note that Abraham Lincoln was born a year or two later and within 100 miles of the place where Davis was born.

Davis joined the United States Military Academy in 1824. In 1826, two days before Christmas Day, a large quantity of whiskey was smuggled into the academy to make eggnog. On 24–25 December, the Eggnog Riot took place due to the drunken Christmas party. More than one-third of the cadets, including Davis, were involved in the riot. Due to his role in the Eggnog Riot, Davis was placed under house arrest though he was not among the 20 cadets who were court-martialed later.

Jefferson’s commanding officer was Zachary Taylor, who would later go on to become president of US. Jefferson fell in love with his daughter Sarah Knox Taylor. The couple asked Zachary’s permission for marriage but he refused citing the difficulties which the wife of a military officer had to face. Jefferson saw his point of view and resigned. On June 17, 1835, Jefferson Davis married Sarah Knox Taylor though her father was still opposed to their union.

Soon after their marriage, Jefferson and Sarah travelled to his sister Anna’s home in West Feliciana Parish, Louisiana. There the couple contracted malaria and fell severely ill. On September 15, 1835, just three months after marriage, Sarah died from the disease. Davis was also about to die but his health improved in the month following his wife’s death and he slowly recovered.

About nine years after the death of his first wife, Davis met Varina Banks Howell. Within a month of their meeting, the 35 year old Davis asked Varina, who was 17 years old, to marry him. The couple was married on February 26, 1845. Jefferson and Varina had six children. However, three of them died before reaching adulthood while one died at the age of 21 due to yellow fever. Only two of Jefferson’s six children, Margaret Howell and Varina Anne (‘Winnie’), outlived him.

#6 Davis fought in the Mexican–American War

In December 1845, Davis won election to the U.S. House of Representatives and claimed a seat in Congress. However, after the Mexican–American War began in 1846, he resigned from his position in Congress to take part in the war. He held the rank of colonel under his former father-in-law, General Zachary Taylor. In September 1846, Davis led his men to victory in an assault at Fort Teneria in the Battle of Monterrey. In February 1847, he fought bravely at the Battle of Buena Vista, was shot on the foot and won nationwide acclaim for his effort. General Zachary Taylor was so impressed with his effort that he admitted, “My daughter, sir, was a better judge of men than I was.”

In 1853, President Franklin Pierce appointed Davis as Secretary of War. After the end of Pierce’s term, Davis ran for the senate and was elected. He was opposed to secession but he continued to defend the rights of southern slave states. He was well known for his support of slavery in the senate. In January 1861, Mississippi left the Union and on the 21st, Davis resigned from the US Senate and returned to Mississippi. He called it the saddest day of his life. The Confederacy was formed and on February 18, 1861, Davis was named president of the Confederate States of America. He acted as provisional president for some duration till on November 6, 1861, he was elected for a full six year term. His inauguration took place on February 22, 1862.

Jefferson Davis has been criticized for his leadership during the American Civil War. Historians cite his poor management of his generals, clashes with men in important positions, favoritism towards friends and neglect of civil matters in favor of military ones as reasons behind the defeat of the Confederate States. Generally it is agreed that he was an inferior leader to his Union counterpart Abraham Lincoln. However it should be kept in mind that when the war started, the Union had 21 million people compared to 11 million in the South, vastly greater industrial capacity, better railroad system and a much larger navy. Hence defeating the far superior Union was an enormous task for any leader. 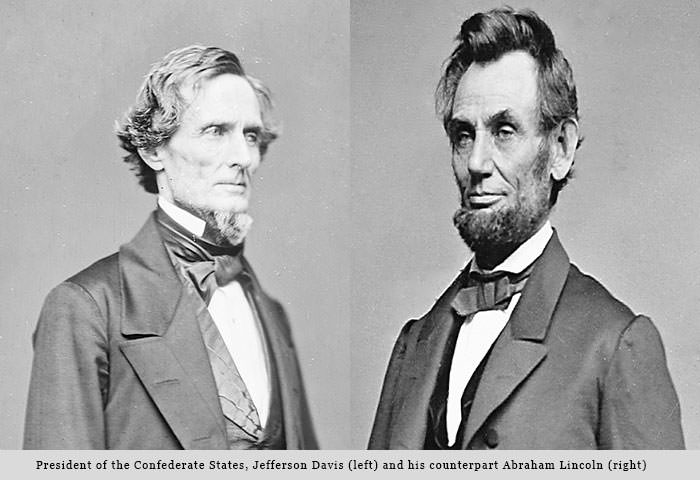 After the Confederate States lost to the Union, Davis along with his cabinet fled from Richmond to Danville, Virginia. On May 5, 1865, President Davis met with his cabinet for the last time and officially dissolved the Confederate government. After Lincoln’s death, his successor Andrew Johnson issued a $100,000 reward for the capture of Davis. On May 10, Davis and his wife were captured by Union forces. Davis was imprisoned at Fort Monroe in Virginia from May 22, 1865, to May 13, 1867. Though he was accused of treason, he was never tried and was released on bail of $100,000.

Jefferson’s health and financial position suffered after his term in jail. Upon learning about his misfortunes, American novelist and historian, Sarah Dorsey, who was a widow, invited Davis to stay at her estate of Beauvoir in Biloxi, Mississippi. Here Davis spent the rest of his life and wrote the book ‘The Rise and Fall of the Confederate Government (1881)’ and the memoir ‘A Short History of the Confederate States of America (1889).’ On December 6, 1889, Jefferson Davis died at the age of 81, of acute bronchitis in New Orleans, Louisiana. Several of his friends were present at the time of his death and he held the hand of his wife Varina. His funeral was one of the largest in the South. Davis remained a symbol of Southern pride after his death and numerous memorials were built to honor him.