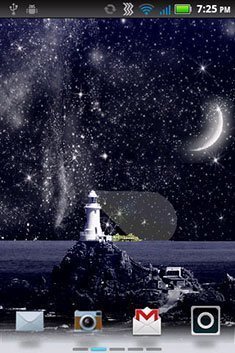 ‘A Thing of Beauty is a Joy Forever’
John Keats

Have ever experienced the wonderful feeling of lying on your roof and staring at the beautiful sky; partly cloudy but not so much that it doesn’t allow you to watch and be engulfed with the power of the limitless stars and the magnificence of the moon? Well if you have you can bring that magic to your own device through the Magical Night Sky Live Wallpaper.

Download Magical Night Sky and experience a wonderful star lit night sky on your android devices. The wallpaper captures a starry night scene from the ocean bed with a lighthouse and ships moving in the distance. Add to that the glow of the moon amidst the yawning clouds and 14 enigmatic constellations and you have a breathtaking view each time you use your device.

What more it comes with a plethora of options which allow you to create different versions of the wallpaper to make it look exactly like you want it to!

Constellations are formation of stars in the sky observed and studied by scholars for thousands of years. The ‘Magical Night Sky live wallpaper’ brings 14 of the most famous on your screen.

Choose from 5 sets of famous constellations that include the Big Dipper, Orion, Sagitarius, Pices, Gemini, Two dogs and Hercules among others.

Choose from the 5 cloud sets moving in different directions

#4    Switch on and switch off the lighthouse

#5    Three types of ships in traffic