Michelle LaVaughn Robinson Obama was born on January 17, 1964 in Chicago, Illinois. The families of her father, Fraser Robinson III, and mother, Marian Shields Robinson, traced their roots to African American slaves from pre-Civil War American southern states. Completing her professional education, Michelle Robinson joined as an associate at the law firm Sidley & Austin, looking after intellectual property and marketing. In 1991, she served as an Assistant to the Mayor and as Assistant Commissioner of Planning and Development, public sector positions under the Chicago City Government. In 1993, Michelle Robinson Obama became the Founding Executive Director of Public Allies, The Chicago Chapter. She served as the Associate Dean of Student Services for the University Of Chicago from 1996 to 2002. In 2002, Michelle Obama started working as Executive Director for Community Affairs under University of Chicago Hospitals. Mrs. Michelle Obama extensively campaigned for her husband Barack Obama’s presidential bid throughout 2007- 2008 and was a driving force behind his nomination. She launched a series of successful national campaigns during her stint as the First Lady and served as a powerful role model for women and African-Americans. In 2018, she released her memoir, Becoming, which emerged to be one of the bestselling books of the decade. The following year, Time Magazine recognized her as one of the most influential women of the last 100 years, who shaped history. Here are the 10 most important accomplishments of former First Lady, Michelle LaVaughn Robinson Obama. 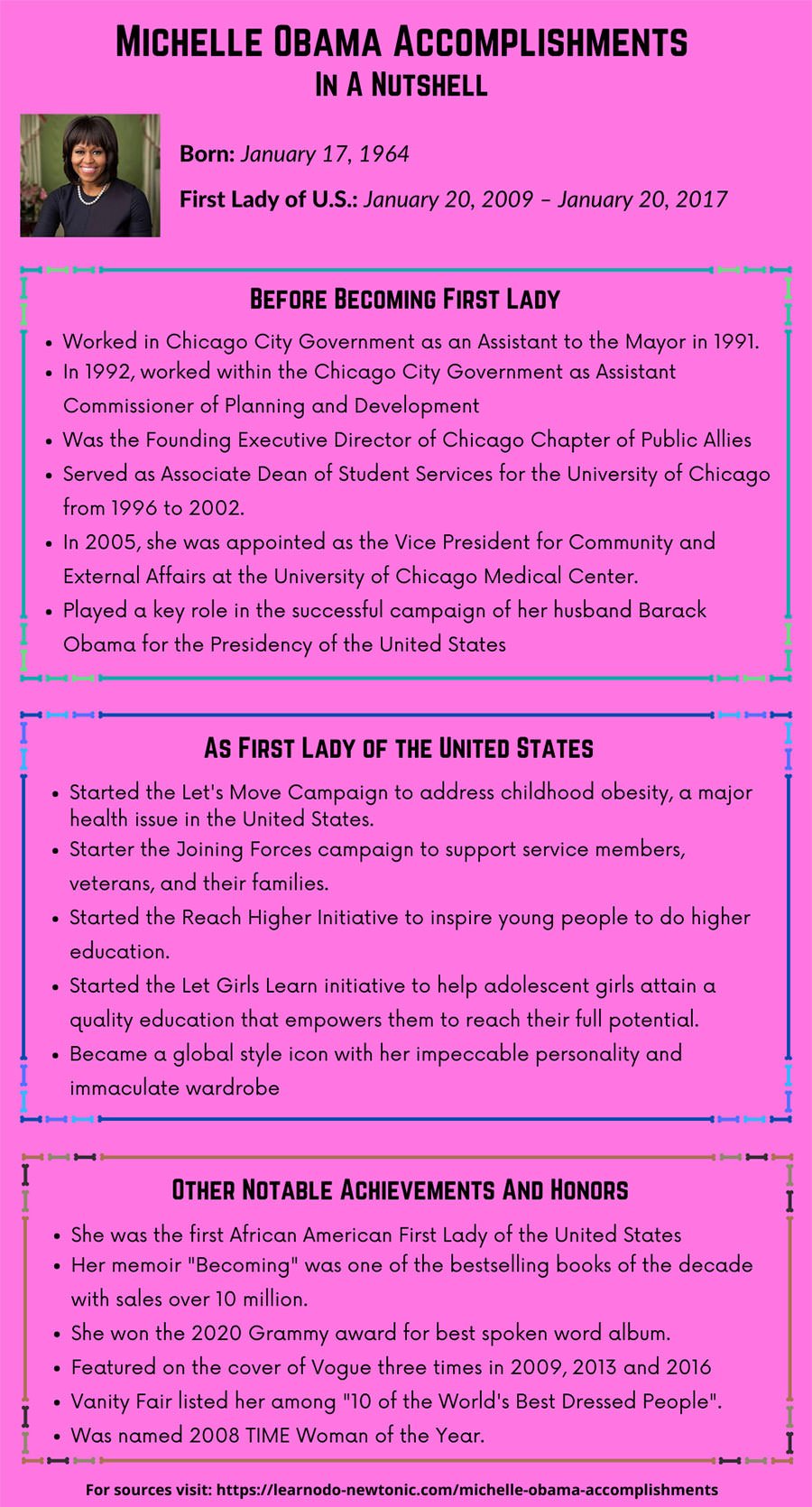 Michelle Robinson attended Princeton University and graduated with a Bachelor of Arts degree in Sociology and African-American Studies with the class of 1985. Further, she pursued a Law Degree from Harvard Law School and was only the third First Lady with a Postgraduate Degree. After graduating in 1988, she joined the Chicago law firm Sidley & Austin, where she later met Barack Obama, her future husband and the 44th President of the United States. In 1991, Michelle Robinson joined the Chicago City Government as an Assistant to the Mayor, Richard Daley. A year later, she moved to another position within the Chicago City Government taking the role of Assistant Commissioner of Planning and Development. In her role, she leveraged her business experience from the Law Firm, and served as a cooperator in the intra-city activities. In addition, she also helped in developing businesses to encourage Chicago’s Economic Development.

The loss of Michelle’s father Fraser Robinson and close friend Suzanne Alele became a turning point in her life. In 1993, Michelle Obama decided her true calling was working with people to serve their communities and their neighbors. This led to her becoming the Founding Executive Director of the Chicago Chapter of Public Allies, an American Nonprofit Organization that helps Young Adults, from all backgrounds, levels of education and professional experiences to develop skills for future careers in the public sector. The mission of the organization is to create a just and equitable society and the diverse leadership to sustain it. As the founder of the Chicago branch of the organization, Michelle Obama was a highly successful fundraiser and executive, helping launch Public Allies successfully. Due to the progressive and liberal aim of the Public Allies, President Bill Clinton named it as a model for National Service. In 1994, Public Allies, along with Habitat for Humanity and YouthBuild, were among the first recipients of AmeriCorps grants, a voluntary civil society program supported by the U.S. Federal Government, among other donors. Mrs. Obama served as the Chicago branch’s Executive Director until 1996.

In 1996, Mrs. Michelle Obama joined the University of Chicago, as the Associate Dean of Student Services, with a vision of bringing campus and community together. In her role, she helped to develop the University’s 1st Community Outreach Programs. Under her leadership, voluntarism increased among students making it one of the most important extracurricular activities on campus. Michelle’s extensive experience, immense support and indispensable guidance encouraged students to participate in a wide range of service opportunities in the communities around the University as well as throughout the city.

In 2002, Michelle Obama started working as Executive Director for Community Affairs under University of Chicago Hospitals, a nationally ranked academic medical center located in Hyde Park on the South Side of Chicago. In her role, Michelle provided care, imagination and energy to every project and quickly built up programs for Community Relations, Neighborhood Outreach, Volunteer Recruitment, Staff Diversity and Minority Contracting. In May 2005, Michelle was appointed as the Vice President for Community and External Affairs at the University of Chicago Medical Center (UChicago Medicine). She was responsible for all programs and initiatives to expand partnerships with local organizations, communities and institutions. Moreover, she also took over the management of the Hospitals’ Business Diversity Program. Among other things, Mrs. Obama also served on several boards, including TreeHouse Foods, and the prestigious Chicago Council on Global Affairs.

Main Sources:-
(May 8, 2005). “Michelle Obama appointed vice president for community and external affairs at the University of Chicago Hospitals“. UChicagoMedicine.

In May 2007, after her husband Barrack Obama declared his presidential candidacy, Michelle reduced her professional responsibilities from her position at the University of Chicago to devote herself more fully to campaigning series. In the early stages of the campaign, she had limited involvement traveling 2 days in a week. She took on a more active role by early February 2008, speaking to voters in different states on various issues. The presidential campaign was Michelle Obama’s first exposure to the national political scene. An adept speaker, she worked extensively for her husband’s presidential campaign during the long Democratic primary race. At the United States’ 2008 Democratic National Convention speech, Mrs. Obama drew parallels between herself and her family and the ideas of an American Dream, finding a personal link with her audiences. The stirring speech won overwhelming praise from the media and public, as reflected in polls. Finally, in June 2008, Barack Obama became the Democratic Party’s first nonwhite nominee as well as a nominee of African descent for President. In 2009, Barack Obama would go on to be elected as the 44th President of the United States, by defeating the Republican Candidate, John McCain. Mrs. Michelle Obama thus became the first African-American First Lady of the United States.

During her early months as First Lady, Michelle Obama continued her efforts to support and inspire young people. In January 2010, Obama undertook her first lady role and launched “Let’s Move!”, a public health campaign in the United States, to make progress in reversing the 21st-century trend of childhood obesity. A Task Force on childhood obesity was created to review all current programs and create a national plan for change to encourage healthier food in schools, better food labeling and more physical activity for children. In an effort to promote healthy eating, she planted a vegetable garden on the South Lawn of the White House in 2009. She related her experiences with the project in her 2012 book “American Grown: The Story of the White House Kitchen Garden and Gardens across America”. She had also been one of the only people in the administration to address obesity through promoting good eating habits. Her other major initiatives as first lady include the following:-

In 2011, Michelle Obama and Dr. Jill Biden came together to launch Joining Forces, a nationwide initiative calling all Americans to rally around service members, veterans, and their families and support them through wellness, education and employment opportunities.

Launched by Mrs. Obama in 2014, Reach Higher Initiative is an effort to inspire young people across America to take charge of their future by completing their education past high school, whether at a professional training program, a community college or a four-year college or university.

In 2015, Mrs. Obama joined her husband to launch Let Girls Learn, a U.S. government initiative aimed at helping adolescent girls attain a quality education that empowers them to reach their full potential. Michelle Obama believes that a girl with an education can shape her own destiny, lift up her family and transform her community. Apart from these initiatives, she was also involved in promoting the arts and arts education.

As first lady, Michelle Obama served as a powerful role model, who would influence the view the world has of African-Americans. Along with being an advocate for poverty awareness, education, nutrition, physical activity, and healthy eating; she evolved into a global style icon with her impeccable personality and immaculate wardrobe. Her effortless sense of style and gracious demeanor as the first lady brought the African American women into focus. As a beautiful, dark-skinned woman, who is educated, poised and can hold her own in a political landscape, Michelle Obama affronted many dogmas and inspired others to break new ground. Michelle Obama has been compared to Jacqueline Kennedy due to her sense of style and also to Barbara Bush for her discipline and decorum. She became a fashion trendsetter, including her first-term official portrait in a dress by Michael Kors, and her ball gowns designed by Jason Wu for both inaugurals. In 2016, she was featured on the cover of Vogue for the third time after 2009 and 2013. Vanity Fair also listed her among “10 of the World’s Best Dressed People”. Over the course of time, Michelle Obama has truly solidified herself as a beacon of strength, womanhood and entrepreneurial endeavor.

After Barrack Obama’s term ended in 2017, Michelle kept a relatively low public profile. However, in 2018 she released her memoir, “Becoming”. In the autobiography, she talks about her roots and how she found her voice, as well as her time in the White House, her public health campaign and her role as a mother. In an amalgamation of unerring honesty and lively wit, she describes her triumphs and her disappointments, both public and private, telling her full story as she has lived it, in her own words and on her own terms. Becoming was released in 24 languages and sold 1.4m copies in its first week, shooting to No. 1 on the Amazon Best Sellers list. According to CNN, it was the most-sold book on Amazon across all formats for 47 consecutive days, the longest streak of any book since the erotic novel Fifty Shades of Grey in 2012. One million copies of the book were donated to First Book, an American nonprofit organization which provides books to children. Becoming had sold 10 million copies by late March 2019 and emerged to be one of the bestselling books of the decade.

In addition to being the former First Lady of the United States and a bestselling author, Michelle Obama received the Best Spoken Word Album at the 2020 Grammys, for the Audiobook version of her 2018 memoir, Becoming. She beat nominees John Waters and the Beastie Boys, among others. In her book, she shares her journey from a little girl from the South Side of Chicago to lawyer and the First Lady of the United States. It wasthe third Grammy win for the Obama household, in addition to two won by her husband. Michelle Obama is also the second Former First Lady to win a Grammy for Best Spoken Word Album after Hillary Clinton won in 2003 for “Living History.”

Time magazine had been naming the Man of the Year for several decades, an honor that would be changed to Person of the Year in 1999. In 2019, in order to mark International Women’s Day and the 100th anniversary of American women getting the right to vote, Time magazine compiled a list of the women who defined a century, choosing one woman per year from 1920 through 2019. 89 new time covers were designed, minus the 11 instances when women had been on the cover for Person of the Year. Michelle Obama was recognized in this Time Magazine project, as one of the most influential women of the last 100 years, who shaped history. She was chosen as the Woman of the Year 2008 for her crucial role in Barack Obama’s Presidential Campaigns, “expanding the American Dream” and for her subsequent efforts in tackling social issues.