Percy Bysshe Shelley (1792–1822) was an English writer who is considered one of the greatest poets in the English language. Romanticism was a cultural movement that originated in Europe toward the end of the 18th century and lasted for around 50 years. It focussed on emotion and individualism as well as glorification of the past and of nature. Shelley was one of the major figures of Romanticism and he created some of the best known works of the movement. He was a controversial writer whose poems are marked by uncompromising idealism and great personal conviction. Though he couldn’t gather a mainstream following during his short life, he became an idol for later generation of poets and ultimately achieved worldwide fame. Percy Shelley’s second wife, Mary Shelley, was the author of Frankenstein. Here are the 10 most famous poems of P B Shelley including the elegy Adonais, the sonnet Ozymandias and the Ode to the West Wind.

Comprising of just two stanzas of four lines, Music, When Soft Voices Die is one of the most anthologized and influence poems of Shelley. It was first published in Posthumous Poems of Percy Bysshe Shelley with the title “To—“. The theme of the poem is the endurance of the memories of events and of sensations. The poem has been set to music by numerous composers. Its opening and closing couplets are especially renowned and often appear in popular culture.

Vibrates in the memory—

Live within the sense they quicken.

Rose leaves, when the rose is dead,

Are heaped for the belovèd’s bed;

And so thy thoughts, when thou art gone,

Love itself shall slumber on.

England in 1819 is a political sonnet, a fourteen line poem. The poem passionately attacks the ruling class of England, its king, its army, its nobility, its senate, etc. George III of the United Kingdom is referred to as “old, mad, blind, despised, and dying”; the army is described as corrupt and dangerous to liberty; the laws as “tempt and slay”; and religion as Christless and Godless. The people of England are thus starved, oppressed and hopeless. A splendid expression of anger against the decadent ruling class of England at the time, England in 1819 is one of the most acclaimed political works of P. B. Shelley.

Princes, the dregs of their dull race, who flow

Through public scorn,—mud from a muddy spring;

Rulers who neither see nor feel nor know,

But leechlike to their fainting country cling

Till they drop, blind in blood, without a blow.

A people starved and stabbed in th’ untilled field;

An army, whom liberticide and prey

Makes as a two-edged sword to all who wield;

Golden and sanguine laws which tempt and slay;

Are graves from which a glorious Phantom may

Burst, to illumine our tempestuous day.

This poem is written in first person with ”The Cloud” speaking throughout the poem. ”The Cloud” can be seen as a personification and a metaphor for the perpetual cycle of transformation and change in nature. Shelley has endowed it with powers and attributes that personify the forces of nature and can be compared to that of an immortal divine being. The Cloud was noted for its originality on first being published and in 1880, Irish writer John Todhunter called it the most popular poem of Shelley, along with To a Skylark. It remains one of his best known works.

I am the daughter of Earth and Water,

And the nursling of the Sky;

I pass through the pores of the ocean and shores;

I change, but I cannot die.

This poem was written by Shelley during his tour to the Chamonix Valley, from where one has a wonderful view of Mont Blanc, the highest mountain in the Alps with a height of 4,808m. The poem Mont Blanc is primarily about an interaction between nature and the mind. In it, the speaker compares the power of the mountain against the power of the human imagination. The main focus of the poem is the relationship between the human mind and the universe. Mont Blanc is one of the most famous odes of Percy Bysshe Shelley.

Dizzy Ravine! and when I gaze on thee

I seem as in a trance sublime and strange

To muse on my own separate fantasy,

My own, my human mind, which passively

With the clear universe of things around;

This poem was inspired by song of a skylark Percy heard while taking an evening walk with his wife Mary Shelley in the country near Livorno, Italy. The speaker of the poem tells the bird how much he loves its singing. He compares it to a number of things including a star, a poet and a worm. He then states that nothing human beings can make can ever compare with the beautiful song of this bird. He concludes by saying that how he wishes he could sing with as much joy and freedom as this bird.

We look before and after,

And pine for what is not:

With some pain is fraught;

Our sweetest songs are those that tell of saddest thought.

#5 The Masque of Anarchy

The Peterloo Massacre occurred at St Peter’s Field, Manchester, England, on 16 August 1819. During the incident, the English cavalry charged into a crowd gathered to demand the reform of parliamentary representation. 15 people were killed and more than 400 were injured. Shelley wrote this poem of 91 stanzas in response to the Peterloo Massacre. In it, he calls on the people to meet unjust forms of authority in a radically different way, through non-violent resistance. The Masque of Anarchy has been called “the greatest political poem ever written in English” and such is its influence that even Mahatma Gandhi quoted it several times to his audiences.

Which in sleep had fallen on you —

Ye are many — they are few.

Full Title: Adonaïs: An Elegy on the Death of John Keats, Author of Endymion, Hyperion, etc.

Famous English writer John Keats was a friend of P. B. Shelley and they often corresponded. This poem was written by Shelley seven weeks after the funeral of Keats, who died at the age of 25 in 1821. In it, Shelley uses the untimely death of the Greek god of fertility, Adonis, as an extended metaphor for the death of Keats. The poem initially describes the mourning due to the death of Adonais before the speaker urges the mourners to stop weeping as Adonais is now one with nature. He has gone where “envy and calumny and hate and pain” cannot reach him. Adonais is considered one of the finest works of Shelley and it is one of the most famous elegies in the English language.

The breath whose might I have invok’d in song

Descends on me; my spirit’s bark is driven,

Whose sails were never to the tempest given;

The massy earth and sphered skies are riven!

I am borne darkly, fearfully, afar;

Whilst, burning through the inmost veil of Heaven,

Beacons from the abode where the Eternal are.

Prometheus is a deity in Greek mythology who stole fire from Mount Olympus and gave it to humankind. For this deed he is subjected to eternal punishment and suffering at the hands of Zeus, the King of Gods. Shelley’s Prometheus Unbound is a four act lyrical drama based on this myth. Filled with suspense, mystery and other dramatic effects, it is considered a poetic masterpiece that combines supple blank verse with a variety of complex lyric measures. Prometheus Unbound is one of the best known poems of P. B. Shelley and it is widely regarded as his greatest work.

Death is the veil which those who live call life:

They sleep, and it is lifted: and meanwhile

In mild variety the seasons mild

With rainbow-skirted showers, and odorous winds,

And the life-kindling shafts of the keen sun’s

Of the calm moonbeams, a soft influence mild,

Shall clothe the forests and the fields, aye, even

With ever-living leaves, and fruits, and flowers.

Ode to the West Wind consists of five cantos or sections. In the first part of three cantos, Shelley talks about the great powers that the west wind possesses. In the second part, comprising of the last two cantos, he concentrates on the relationship between the wind and the narrator. Shelley believed that a poet could be instrumental in bringing social and political change and this ode personifies the west wind as an agent to spread that change. Ode to the West Wind is not only one of the most influential works of Shelley but also one of the most famous odes ever written.

Scatter, as from an unextinguish’d hearth

Ashes and sparks, my words among mankind!

Be through my lips to unawaken’d earth

The trumpet of a prophecy! O Wind,

If Winter comes, can Spring be far behind?

Ozymandias was the Greek name for the Egyptian pharaoh Ramses II, perhaps the most powerful king of Ancient Egypt. In Percy’s poem the speaker recalls meeting a traveller who tells him about two huge stone legs and a damaged head of a statue. The sculptor of the work had captured the pride of his subject. On the pedestal of the statue appear the words, “My name is Ozymandias, king of kings: / Look on my works, ye Mighty, and despair!” However around the ruin is nothing but “lone and level sands”. The poem focuses on the momentary nature of power with its central theme being the inevitable decline of all leaders, no matter how great they consider themselves. Ozymandias is the most famous poem written by Percy Bysshe Shelley and one of the best known sonnets in English literature.

I met a traveller from an antique land,

Who said—“Two vast and trunkless legs of stone

Half sunk a shattered visage lies, whose frown,

And wrinkled lip, and sneer of cold command,

Tell that its sculptor well those passions read

Which yet survive, stamped on these lifeless things,

The hand that mocked them, and the heart that fed;

And on the pedestal, these words appear:

“My name is Ozymandias, King of Kings;

Look on my Works, ye Mighty, and despair!”

Nothing beside remains. Round the decay

Of that colossal Wreck, boundless and bare

The lone and level sands stretch far away.

10 Most Famous Epic Poems of All Time

10 Most Famous Narrative Poems of All Time

10 Most Famous Black Poets And Their Best Known Poems

10 Most Famous Poems In Free Verse By Renowned Poets

10 Most Famous Poems On Nature By Renowned Poets

10 Most Famous Poems In Australian Literature

10 Most Famous Nature Poets And Their Best Known Works 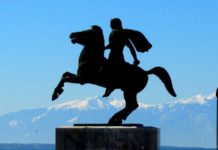 10 Major Accomplishments of Alexander The Great

October 16, 2020
Kiran Peshawaria was born in a Peshawaria business family in Amritsar, Punjab, India, on June 9, 1949. While taking formal education at Sacred Heart...

10 Most Famous Epic Poems of All Time