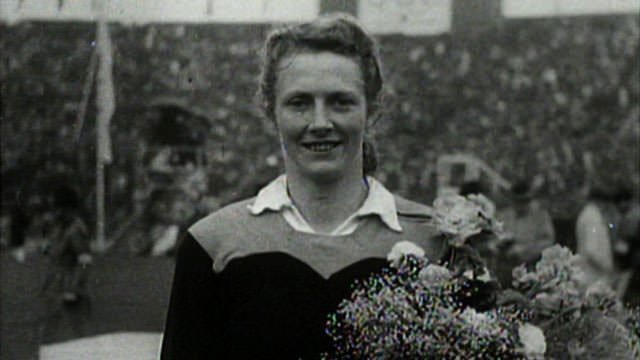 Koen couldn’t compete in the Olympics at the age when most track and field athletes do. The world war prevented many great athletes like her from showcasing their talent to the world. When the Summer Olympics were held in 1948, Koen was already thirty and a mother of two kids. But Koen thought she still had what it takes to be an Olympic champion. Amid people and even media believing that she should stay at home and do her duties of a housewife, Koen decided to compete in the 1948 London Olympics.

Due to competition rules athletes could enter only a maximum of three individual track and field events. This meant that Blankers-Koen was forced to forgo the high jump and the long jump, events in which she held the world record.

In her first event, the 100m, Koen stormed her way to gold leaving the silver medallist three yards behind her when she broke the ribbon. Her next event, the 80m hurdles was a close affair. Koen had a bad start but was neck to neck with Gardner at the end. She bent her neck low and the ribbon cut her neck with blood trickling on her vest. Koen was awarded her second gold medal.

In her third event, the 200m, Fanny defeated the runner-up by a margin of 0.7s, still the largest margin of victory in an Olympic 200m final. The last event in which she was competing was the 4X100m relay. Fanny was running the anchor leg and when she received the baton Netherlands was placed fourth. By running as fast as she could, Fanny went into the lead a couple of metres before the finish line and thus she won her fourth Olympic gold medal of the competition. She was the most successful athlete of the 1948 London Games. More importantly, she had demolished the thinking that motherhood and age were a barrier for a woman to compete in sports.

Even after 68 years, Fanny Blankers-Koen haul of four gold medals is still the greatest individual haul by a woman track and field athlete at a single Olympic Games. Fanny was a complete athlete. She held records in a variety of events. In 1999, she was voted “Female Athlete of the Century” by the International Association of Athletics Federations.