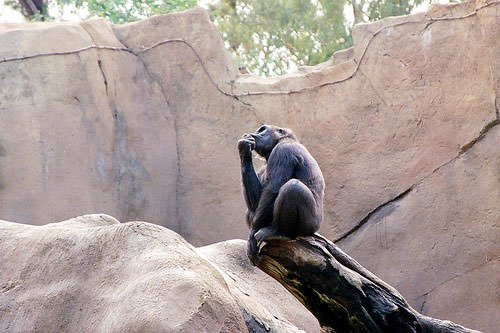 Santino is a male chimpanzee held at Furuvik zoo in Sweden. He may be the first animal to exhibit an ability to plan for the future; a behaviour many scientists argue is unique to humans. Reports of Santino’s pre-planned attacks on spectators appeared in the press in 2009.

Santino used to throw stones at visitor to the zoo. When the zookeepers investigated, they found that, while the zoo was closed the chimp had been busy stockpiling ammunition in anticipation of the visitors, dragging stones from a protective moat to the area facing the crowds. He used to also thump the concrete floor with his fist to release chunk of concrete that he broke into rough disks to add to his ammunition.

Cognitive scientist Mathias Osvath believes that such complex forward planning suggests Santino can anticipate future events and is able to devise ways of dealing with them. He said, “Forward planning like this is supposed to be uniquely human; it implies a consciousness that is very special, that you can close your eyes you can see this inner world. Many apes throw objects, but the novelty with Santino is that he makes caches of these missiles while he is fully calm and only throws them much later on.“

To keep his hormones level down and to control his behaviour, ‘poor Santino’ was castrated by the zookepers. It has been reported that he is more playful and less agitated now.