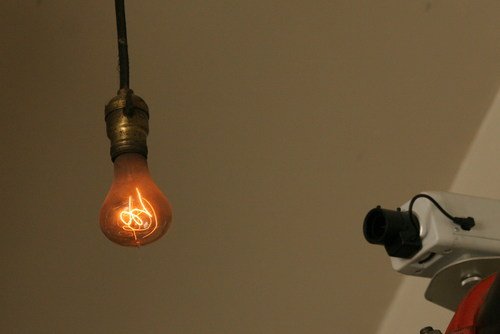 In 4550 East Avenue, Livermore, California there is a light bulb that is now being in use for over 110 years. The Centennial Light, as the bulb is now famously referred to, is a four-watt, hand-blown, carbon-filament, common light bulb manufactured in Shelby, Ohio, by the Shelby Electric Company in the late 1890s. It has been recognized as the world’s longest-lasting light bulb by The Guinness Book of World Records, Ripley’s Believe It or Not!, GE and many more. The bulb is maintained by the Livermore-Pleasanton Fire Department.

Professor Adolphe Chaillet who set up the bulb factory in Shelby, Ohio in 1896 deserves much of the credit for this amazing bulb. Prof. Chaillet was a thorough chemist, mineralogist and inventor whose improved filament is cited as one of the primary reasons for the bulb’s longevity.

The bulb it is believed  was donated to the Fire Department by Dennis Bernal in 1901. Bernal owned the Livermore Power and Water Company and donated the bulb to the fire station when he sold his company.

More interestingly the bulb is often cited as evidence for the ‘Light Bulb Conspiracy’ and the existence of planned obsolescence in manufactured products.

The light bulb conspiracy is a theory that believes that leading manufacturers of incandescent light bulbs conspired to keep the lifetime of their bulbs far below their real technological capabilities. As a result they ensure demand for more bulbs and never ending profit for themselves.

Light bulbs were being used commercially in the early twentieth century after Edison found a way to mass produce them. In 1924 the International Phebes cartel was formed by the leading bulb manufactures to standardize the light bulbs.

The conspiracy theory suggests that the goal of cartel was not to develop international standards but decrease the quality of all light bulbs, and hence boost demand. The life of the bulbs was to decline gradually to avoid drawing public attention.

The Phoebus cartel was disbanded 1939, but its influence is still believed to be felt across sectors. Few arguments that support the theory were that light bulbs made in socialist countries like the soviet union were noted to have a twice as long lifetime during those times. It was also noted that bulbs produced in Britain during or immediately after World War II, when the patriotic feelings could take over commercial interests, are still found in use to this day. Interestingly these bulbs were sought after by manufacturers, who remove them from circulation “for study”.

The death of Dieter Binninger only adds fuel to fire. In 1975 the German watchmaker invented a light bulb for which he promised a service life of 17 years. 16 years on, in 1991 Binninger bought a small light bulb manufacturing company in order to begin with the production. Only a few days after the purchase he died in a plane crash of mysterious circumstances.