Winston Churchill (1874 – 1965) is most famous for leading Great Britain successfully during the Second World War. Although he lost the elections after the war, Churchill did serve a second term as Prime Minister of the United Kingdom from 1951 to 1955. Before World War II, he held several prominent positions in the parliament including President of the Board of Trade (1908 – 1910), Home Secretary (1910 – 1911), First Lord of the Admiralty (1911 – 1915), Secretary of State for War (1919 – 1921), Secretary of State for the Colonies (1921 – 1922) and Chancellor of the Exchequer (1924 – 1929). Churchill was also a prominent non-fiction writer and won the 1953 Nobel Prize in Literature. Know more about the political career of Churchill before World War II, his leadership during the war, his writing career and other contributions, through his 10 major accomplishments.

The political career of Winston Churchill began after he was elected as a Member of Parliament from the constituency of Oldham. In 1908, he became a part of the Cabinet as President of the Board of Trade. Churchill’s achievements in this capacity include the Mines Act of 1908, which provided for an 8-hour day in all mines; the Trades Boards Act of 1909, which established the first minimum wage system in Britain by mandating rates for 200,000 workers in several industries; and the Labour Exchanges Act of 1909, which set up offices to help the unemployed find employment.

In 1909, the famous People’s Budget was introduced in the British Parliament by David Lloyd George. Churchill vigorously supported the budget, which introduced unprecedented taxes on the wealthy and radical social welfare programmes in Britain. It is considered the first budget in British history with the expressed intent of redistributing wealth among the British public. During his early political career, Churchill also played an active role in bringing about wide range of radical social reforms which became known as Liberal welfare reforms. Among other things, these included providing children with free school meals, introducing pensions for those over 70 and allowing farmers to farm their holdings without interference from landlords.

#3 He implemented naval reforms as First Lord of the Admiralty

Winston Churchill was promoted to Home Secretary in 1910. His term saw the passage of the National Insurance Act of 1911, which provided compulsory health insurance for workers who earned less than £160 per year. It is considered as one of the foundations of modern social welfare in the UK. In 1911, Churchill was made First Lord of the Admiralty, a post he held on to till 1915. His primary contribution in this capacity were naval reforms which included setting up in 1912 of the Royal Naval Air Service, a department of naval aviation; move to a larger gun as the main armament of battleships; and the development of battleships which were superior in firepower, protection and speed. Churchill also sponsored the development of the tank, which was financed from naval research funds.

After a horrid term as the Chancellor of the Exchequer from 1924 to 1929, Churchill remained politically uninfluential for most of the 1930s. During this time he vehemently warned against Germany’s rearmament, called on Britain to strengthen itself to counter German belligerence and was a fierce critic of Prime Minister Neville Chamberlain’s appeasement of German Chancellor Adolf Hitler. On 3 September 1939, the day UK declared war on Germany, following the outbreak of World War II, Winston Churchill was re-appointed First Lord of the Admiralty. During the Battle of France, Chamberlain resigned and Winston Churchill became the Prime Minister of the United Kingdom on 10th May 1940. He remained in office till 26th July 1945 successfully leading Great Britain through the Second World War.

Upon becoming Prime Minister, Churchill formed a coalition cabinet of leaders from the Labour, Liberal and Conservative parties. He made sure it represented all groups and was able to take swift decisions. Though he dominated Parliament, he never took it for granted and ensured that it was free from domestic political conflicts. Churchill rubbished talks of surrender and rejected Germany’s proposal for a peace treaty. Instead he gave his electrifying “This was their finest hour” speech in which he asked Britain to prepare for the Battle of Britain, urged its people to “brace ourselves to our duties” and prepared the British for a long war. He gave stirring speeches in Parliament and on the radio to unite the nation and make it stand as one. Under the able leadership of Churchill, Britain handed Germany its first major defeat in World War II in the Battle of Britain in 1940.

#7 Along with Roosevelt and Stalin, Churchill led Allied Coalition to victory in World War II

Winston Churchill had a very good relationship with United States President Franklin D. Roosevelt. The two held many conferences which covered various war policies. When Adolf Hitler launched his attack on the Soviet Union, Churchill unequivocally vowed to support the Soviet Union despite his vehement anti-communist views. After United States entered World War II following the Attack on Pearl Harbor, Churchill worked closely with U.S. President Roosevelt and Soviet Union leader Joseph Stalin. He was primarily responsible for the formation of the grand alliance between the three nations. The three leaders, known as the ‘Big Three’ of the Allied Coalition, were instrumental in implementing a war strategy that resulted in the defeat of Axis Powers in the Second World War.

Despite successfully leading Britain in World War II, Churchill lost his position as Prime Minister in the 1945 general election. Instead, he served as Leader of the Opposition for six years from July 26, 1945 to October 26, 1951. After the general election of October 1951, Winston Churchill again became prime minister and served until his resignation in April 1955. Domestic reforms in his second term include the Mines and Quarries Act of 1954, which made provisions for management of mines and quarries, and for securing safety, health and welfare of the people employed there; and the Housing Repairs and Rent Act of 1955, which extended previous housing Acts, and set out details in defining housing units as “unfit for human habitation.” In foreign affairs, Churchill’s second tenure saw rebellions in Kenya and Malaya, to which he controversially responded with direct military action.

Churchill was a prolific writer. His output includes a novel, two biographies, three volumes of memoirs, and several histories. During his early career, he wrote for The Pioneer, The Daily Telegraph and the Morning Post. His first work The Story of the Malakand Field Force was published in 1898. His famous works include a four-volume history of Britain and its colonies, A History of the English-Speaking Peoples (1956–58); and The Second World War (1948–53), a book series in six volumes which was a major critical and commercial success. Winston Churchill won the Nobel Prize in Literature in 1953 for his overall, lifetime body of work. Apart from being a leading non-fiction writer, Churchill had a brief career in the British army during which he fought as Lieutenant during the Battle of Omdurman in 1898. He was also an artist whose best known paintings are Impressionist landscapes.

#10 Churchill was voted the greatest Briton in history

In 1941, Winston Churchill was elected a Fellow of the Royal Society (FRS). In 1953, he accepted a knighthood becoming a member of the Most Noble Order of the Garter, the highest order of chivalry in UK.  In 1963, he became the first of only eight people to be made an honorary citizen of the United States. In 1999, Churchill was included in 20th century’s 100 most influential people by the TIME magazine and he was also rated as one of the most influential leaders in history by TIME. In a 2002 television poll conducted by the BBC to determine 100 Greatest Britons, Sir Winston Churchill was voted “The Greatest of Them All”. The poll was based on approximately a million votes from BBC viewers. 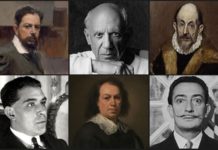 10 Most Famous Spanish Artists And Their Masterpieces

10 Major Achievements of the Mesopotamian Civilization

October 16, 2020
Kiran Peshawaria was born in a Peshawaria business family in Amritsar, Punjab, India, on June 9, 1949. While taking formal education at Sacred Heart...

June 8, 2014
Abraham Lincoln is a very popular president among critics as well as the general public. In Surveys of scholars conducted since 1940, he has...

10 Major Causes of the American Revolution

10 Major Leaders of the American Revolution

10 Interesting People From The American Revolution

10 Major Events of the American Revolution