Batman is widely considered as one of the greatest comic characters of all time. In comics, The Dark Knight Returns is considered the greatest Batman series and it was chosen as one of the 10 best English language graphic novels ever. In television, the mid-1960s Batman television series became so popular that it has been called “the biggest TV phenomenon of the mid-1960s”. In film, The Dark Knight Rises is the most successful Batman movie of all time. Know more about Batman through these 10 interesting facts.

#1 Batman was created to cash on the success of Superman

After the staggering success of Superman DC Comics sensed the demand for more superheroes and this led to the creation of The Batman. Inspired by seeing Leonardo Da Vinci’s sketch of an ornithopter flying device as a child, Bob Kane gave the superhero a bat-wing-like cape. Bill Finger devised the name Bruce Wayne for the character’s secret identity. The first name came from Robert the Bruce, who led Scotland’s War for Independence; while the surname is taken from American Revolutionary War hero, ‘Mad’ Anthony Wayne.

In the initial comics Batman showed little remorse over killing or maiming criminals. He would frequently hurl gangsters off rooftops, or push them into vats of acid. He even used to use guns. His portrayal started to soften in the 1940s after the introduction of Robin. It was Whitney Ellsworth, editor of DC Comics, who decreed that Batman could no longer kill or use a gun. The rules went on to define Batman.

When the comic series started, Batman’s adventures took place in New York City but soon the writers decided to create the fictional Gotham City. Gotham is a village in Nottinghamshire, England; according to folklore, a place inhabited by fools. Due to his dislike for New York, Washington Irving gave it the name Gotham. Bill Finger, while trying to find a name for a fictional city for Batman, was flipping the New York directory when he found ‘Gotham Jewellers‘ listed. He immediately decided that it was the name he was looking for.

Batman’s story has undergone many changes as you would expect from a character created 76 years ago. The one event that is consistent is what made Bruce Wayne into Batman – the murder of his parents in front of his eyes by a mugger called Joe Chill. His parents were killed by gunshots and this was the origin of his hatred against guns. Hence Batman never uses guns.

In 1954, in his book ‘Seduction of the Innocent’, psychologist Fredric Wertham talked about the negative impact of comics on young people. His analysis of Batman stories was that they were psychologically homosexual. He asserted that homoeroticism was spread throughout the adventures of Batman and his friend Robin. The writers of Batman have denied this but there are still people who believe Batman to be gay. 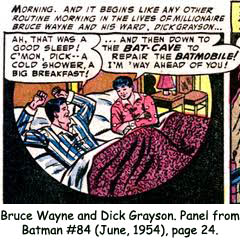 #6 The Dark Knight Returns is considered the greatest Batman series

Released in 1986, The Dark Knight Returns is a four issue miniseries written by Frank Miller. Initially lambasted by the critics, it has now achieved cult status. The series was so influential that it started the era known as the Dark Age of Comic Books. IGN Comics ranked it first on a list of the 25 greatest Batman graphic novels and in 2005, TIME chose it among the 10 best English language graphic novels ever. The 2012 film The Dark Knight Rises drew inspiration from the series, particularly the concept of Batman returning from retirement to fight crime.

In January 1966, the Batman television series premiered on the ABC television network. Starring Adam West as Batman and Burt Ward as Robin, the show was aired for three seasons and became a pop culture phenomenon. It became known for its upbeat theme music and campy moral lessons. It was so popular that it has been called “the biggest TV phenomenon of the mid-1960s”. Other Batman T.V. series of note is the 1992 Batman: The Animated Series which was acclaimed for its dark tone and mature writing.

#9 Batman: Arkham City is the most critically acclaimed Superhero game

There have been multiple video games based on Batman with the most famous one being Batman: Arkham series. The games in the series have been praised for reaching to a darker side of Batman not seen in video games before. The second game of the series Arkham City received widespread critical acclaim and won multiple awards including Game of the Year Award. It currently holds Guinness World Record for Most Critically Acclaimed Superhero Game Ever with the average GameRankings score of 96.12%.

In May 2011, Batman was placed second on IGN’s Top 100 Comic Book Heroes of All Time, after Superman. Empire magazine also listed him second in their list. Batman was included in BusinessWeek’s list of ten most intelligent superheroes in American comics. Forbes estimated Bruce Wayne to be the 8th-richest fictional character with his $6.9 billion fortune, three places behind Iron Man. A pop cultural icon recognized around the world, Batman has also intrigued psychiatrists with many trying to understand the character’s psyche.